This week the Ngarigo traditional custodians returned to Country to celebrate the declaration of Curiosity Rocks as a protected Aboriginal Place. 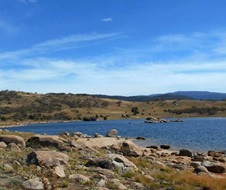 The cultural gathering brought together more than 50 people with a cultural connection to Country and coincided with the first anniversary of Curiosity Rocks being declared an Aboriginal Place under the National Parks and Wildlife Act.

Barrina South from the Office of Environment and Heritage (OEH) said that some of the families, represented by the Aunties of the snowy mountains unveiled a plaque at the sacred site on the shores of Lake Jindabyne.

"Curiosity rocks is the 3rd Aboriginal Place to be declared in Monaro region, NSW for its ongoing cultural significance to Aboriginal communities," said Ms South.

"The Aunties describe Curiosity Rocks as a culturally- rich, spiritual place. A place that has a direct line of sight to the scared Kalkite Mountain.

"Curiosity Rocks is also adjacent to a traditional camping ground and the unusual rock formation naturally makes it a focus point in the physical and cultural landscape," Ms South said.

At the event the four Aunties welcomed everyone back home to Ngarigo Country and said that last year's declaration legally recognised Curiosity Rocks as a special place and sent the message that Ngarigo play an active role in the snowy mountains community.

The community-celebration was supported by the Office of Environment and Heritage and the National Parks and Wildlife Service who respect the importance of bringing people back to Country through the Aboriginal Place program.

OEH would like to acknowledge the role of the Snowy Monaro Regional Council in this project and their ongoing support.

In declaring Aboriginal Places the NSW Government recognise and acknowledge that Aboriginal culture is living and continuing, and that the connection of Aboriginal people to the land and culture is inextricably linked to their wellbeing and future.

Aboriginal people are encouraged to nominate an Aboriginal Place through the OEH website.