Roll out the green carpet - nominations open for Green Globes

The annual NSW Green Globe Awards, which have been celebrating sustainability leaders from the boardroom to the bush for the past 20 years, are now open for nominations. 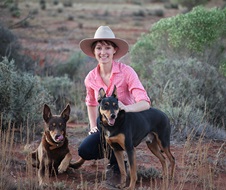 Environment Minister Matt Kean is calling for nominations from citizens across NSW who are doing great things for the environment both locally and internationally.

"This year marks the 20th anniversary of the awards. It's amazing to see what's been achieved by business, not-for-profit groups and inspiring individuals who have started ground-breaking projects with the help of these awards," Mr Kean said.

"Every year we get hundreds of nominations and it doesn't matter whether the nominees are in the country or city – there's great enthusiasm for sustainability and the environment across NSW."

The Green Globes have 12 categories ranging from built and natural environments to innovation and resource efficiency, sustainability and young sustainability champions. A total of 529 Green Globe Awards have been awarded since 1999.

"Anika was recognised for her advocacy for conservation, and work to building resilient agriculture and strong rural communities," Mr Kean said.

"People working in Australian agriculture are making meaningful contributions to vibrant and resilient futures for all of us. My Green Globe Award recognised the challenges farmers face and the efforts being made in food security, environmental conservation and climate adaptation," Ms Molesworth said.

To celebrate the 20th Anniversary of the awards, two Lifetime Achievement Awards are being introduced - one for individuals and one for organisations.

Entries will be judged by an independent panel of 21 experts from the fields of energy, water, waste, sustainability and academia. Winners will be celebrated at a Gala Dinner on 27 November 2019. Nominations are now open until 10 July 2019.