The NSW National Parks and Wildlife Service (NPWS) is urging landholders within the Snowy Monaro Regional Council area to the east of the Kosciuszko National Park boundary to remain vigilant and immediately report possible sightings of the invasive Orange Hawkweed plant to Council to protect feed pastures and natural areas. 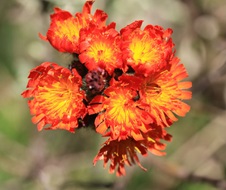 Rebecca Mooy, NPWS Hawkweed Volunteer and Partnerships Coordinator said that the plant's prolific seeding and multiple long strawberry-like runners make it highly invasive like the fictional triffids, but that it poses a real and particularly menacing threat for both alpine biodiversity and surrounding agricultural lands by inhibiting the growth of native plants.

"Native to temperate and mountain areas of north and central Europe, Orange Hawkweed is a member of the daisy family, similar in appearance to dandelions. It has distinctive bright orange flowers with yellow centres and square-edge petals, and flowering begins from early November through to April. With up to 30 flower heads atop of black-haired stems, it can be rather showy making it easy to spot," Ms Mooy said.

"One square metre of Orange Hawkweed can produce up to 40,000 seeds per year that are feather light, and transported easily by wind, rivers, and creeks. Additionally, the seeds have barbs enabling them to hitch a ride, sticking like Velcro to fur, feathers, clothing, tents, ski gear, vehicles, and machinery, then germinating in far-flung locations.

Line searches for Hawkweed were carried out last summer over travelling stock reserves and on additional properties nearby with full support of property owners and lease holders. While no plants were found on newly searched properties, NPWS would like to cast a wider net with ground survey visits to a greater number of properties this summer.

Angela Sharp, Snowy Monaro Regional Council Biosecurity Extension Officer said that prevention of spread is easier than costly eradication and that possible sightings should be immediately reported to Council via email at council@snowymonaro.nsw.gov.au.

"Hawkweed species can establish in a range of growing conditions using a variety of soil types, especially on bare ground. It is highly competitive for space once established and can outcompete pastures, reducing feed value and productivity in grazing areas," Ms Sharp said.

Summer survey visits can be requested by contacting NPWS during October and November via email at hawkweed.mailbox@environment.nsw.gov.au.