NPWS continues the war on Bitou in the Great Lakes

The NSW National Parks and Wildlife Service (NPWS), working in conjunction with Mid Coast Council, will resume their successful bitou bush control campaign in a number of important local national parks and reserves. 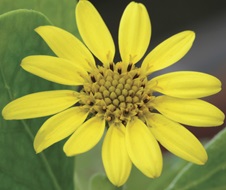 NPWS Area Manager, Stephen Smith, said that his team would continue to build on the immense success they have had controlling this voracious weed over the last 9 years.

"Together, with Council, we have massively reduced bitou bush along 60 kilometres of coastline between Hawks Nest and Tuncurry. In some areas, we started with bitou coverage of 75% and have knocked this back to less than 1%.

"It's vitally important work because in removing this plant we are protecting internationally recognised RAMSAR wetlands, nationally endangered coastal rainforest communities and numerous other threatened plants and animals.

"Our focus has been on Booti Booti and Myall lakes national parks and Corrie Island Nature reserve while Council worked on bitou infestations in between NPWS reserves.

"Bitou bush is horrible stuff and a very aggressive coloniser. It was introduced from South Africa and was originally used in revegetation works following sand mining in the 1950s and 1960s.

It grows rapidly and smothers native plant species, destroying habitats that support a range of wildlife.

"National Parks and Wildlife Service use aerial and ground based spraying to control bitou bush in coastal areas. Through this work we have also been able to support ongoing employment opportunities for local Aboriginal people since 2009.

"Jointly funded by the NPWS, Local Land Services and the Australian Government, we know the effort over the past nine years has been really worthwhile because we have seen a remarkable recovery of native plant communities where bitou bush once flourished and overwhelmed native plants.

"This has been a focused, well planned and executed program and everyone can be proud of what we have achieved for conservation," Mr Smith said.

NPWS will be carrying out helicopter aerial spraying between May 15 and July 31. Aerial spraying is highly weather dependent and only done under very light wind conditions.

Access to the parks will be temporarily restricted in certain areas while helicopter operations are underway and this may affect camping and 4WDriving on some beaches and require traffic control on The Lakes Way, south of Forster. This is done to protect public safety.

"Visitors are asked to adhere to closure signs and directions from NPWS and agency staff", said Mr. Smith.