The National Parks and Wildlife Service has completed hazard reduction burns near Mathoura and Deniliquin in the last few weeks to reduce the risk of impact to homes from potential wildfires. 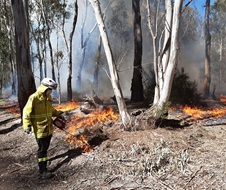 "The burn in Murray Valley National Park near Mathoura involved about 15 NPWS staff from Mathoura, Moama and Griffith and took place over 2 days.

"The result was good, almost 100% black-out within the target area which should provide increased protection for Mathoura village.

"Similarly, parts of the regional park near Deniliquin were treated over 2 days on 18 and 19 April with a crew of 14 NPWS staff.

"The Joggers Trail burn in the south of the park covered around 83 hectares while the Willoughby's Connection burn in the north was about 18 hectares.

"Objectives of these burns were to reduce overall fuel hazards, protect neighbouring residential properties, and reduce risk from escaped campfires.

"Further hazard reduction operations are planned in the area this autumn including a 94 hectare burn at Picnic Point Mathoura, and additional burns in Millewa/Moira next year.

"We thank the community for their cooperation while we carry out this important work," Mr Mares said.