NSW National Parks and Wildlife Service (NPWS) firefighters are hard at work across Sydney and NSW as they roll out an enhanced Hazard Reduction Program for the upcoming fire season. 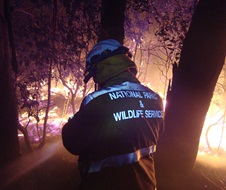 Environment Minister Matt Kean said these essential burns are designed to protect NPWS neighbours, assets and significant habitat to ensure ongoing recovery of the wildlife impacted by the summer bushfires.

"I am incredibly proud of the amazing National Parks and Wildlife Service (NPWS) firefighters who are getting on with job of making our communities safer by undertaking hazard reduction burns," Mr Kean said.

"To support them further, the NSW Government has provided an extra $22.9 million that will fund an additional 125 NPWS firefighters plus an additional helicopter for hazard reduction and remote area wildfire response."

Included in the funding is an increase in the NPWS rapid response remote area firefighter team by up to 80 people (20%).

"The role of NPWS remote area firefighters has been critical in ensuring that, over the last five years, 83% of all fires starting on national park have been contained on national park," Mr Fleming said.

NPWS firefighters were recognised in the recent Bushfire Inquiry, which noted that NPWS had undertaken 79% of all hazard reduction burning in the 7 years leading up to the 2019–20 season.

The NPWS works closely with the Rural Fire Service and Fire and Rescue in planning and undertaking these vitally important hazard reductions.