The National Parks and Wildlife Service Northern Inland Branch has wrapped up its winter hazard reduction burning program for this year. 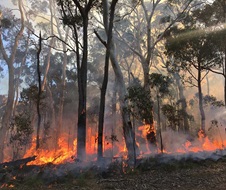 "During July and August NPWS crews have completed 18,000 hectares of hazard reduction burning across the New England and North West.

"Some of the key parks where strategic programs have been undertaken to protect property and wildlife include the Pilliga West and Torrington State Conservation Areas, and Oxley Wild Rivers, Washpool and Mount Kaputar National Parks.

"We have also taken the opportunity during the winter months to ensure all staff fitness testing and training accreditation is up to date.

"Skills refresher and fire preparedness days have also been held throughout the branch, testing our equipment and ensuring it is ready to roll.

"Unfortunately, we have already switched to wildfire suppression in the Northern Tablelands where NPWS crews have been engaged for several weeks responding to wildfires.

"In these conditions, and if weather forecasts don't improve, it is likely we will have park fire bans in place across all parks in the North West and Central West Slopes and Plains fire districts.

"Please check the website before lighting a campfire in a national park over summer.

"Our expertise has also been called on by our counterparts in Canada with four staff from our branch currently helping to suppress wildfires in British Columbia.

The Northern Inland hazard reduction program is part of part of the NSW Government's six-year $76 million package to boost bushfire preparedness and double hazard reduction in the State's national parks.