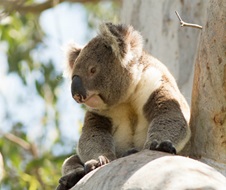 Some of the projects to be funded under the 2017-18 Budget will aim to address key threats to koalas in the Port Stephens, Campbelltown and the Mid-Coast areas and continue to support carers who are rehabilitating injured koalas.

"Any threatened Australian species is a serious issue and we want to invest in the important conservation work to help stabilise and eventually increase koala numbers across the state," Mr Perrottet said.

The NSW Government is finalising its Saving our Species Iconic Koala Project, which will prioritise conservation projects over the next financial year.

This work will build on projects currently underway across the State such as the Blue Mountains satellite tracking project.

"The NSW Government is working with not-for-profit organisation Science for Wildlife, the University of Sydney and San Diego Zoo Global in the Blue Mountains to follow up to 10 koalas in areas where they have never been studied," Ms Upton said.

"It's projects like these that we need to keep funding to protect our koala population into the future."

Data and information collected as part of this conservation work and other projects will also help shape the NSW Government's state-wide whole-of-government Koala Strategy. The Koala Strategy is being developed in response to the NSW Chief Scientist and Engineer's 2016 report on the decline of koala populations in key areas of NSW.

Last year the NSW Government also committed to spending $10 million to 2021 to acquire key koala habitats across the state.

This $10 million investment is in addition to the $2.5 million allocated for the creation in March 2016 of flora reserves totalling 120 square kilometres on the South Coast, run by the National Parks and Wildlife Service, to protect the last known local koala population.