The NSW Government has announced an addition of almost 60,000 hectares of land in the state’s north-west as a new State Conservation Area today, protecting the culturally and environmentally significant land for future generations. 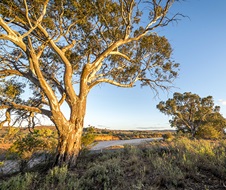 “By reserving Nuntherungie and adding it to the existing Mutawintji Lands we are expanding an exceptionally significant Aboriginal landscape and facilitating the continuing physical and spiritual connection to country for the traditional owners,” Mr Kean said.

The site is the single largest area to be added to the national parks estate since 2010, and will be jointly managed by the NSW National Parks Wildlife Service and Mutawintji Board of Management.

Mutawintji Board of Management Chairperson Warlpa Thompson thanked the NSW Government for its support in furthering a great National Park run by the Mutawintji Wiimpatja people.

“Through Aboriginal ownership of National Parks in NSW, we have established a strong working relationship with the NSW Government, neighbouring farmers, environmentalists and local government,” Mr Thompson said.

“The recognition of our land management practices and the benefits of 60,000 years of accumulated knowledge is exemplified by the expansion of our Country under joint management.”

The new State Conservation Area is also home to the endangered Yellow Footed Rock Wallaby and will support almost 30 other threatened species, including the Eastern Fat-tailed Gecko, Grey Falcon and the Black-breasted Buzzard. It also features a large area of river red gum woodland and associated shrublands of Prickly Wattle and Western Boobialla.