NSW Government to the (genetic) rescue of the endangered Eastern bristlebird

The NSW Government is launching a genetic rescue mission to save one of NSW's rarest birds, the Eastern bristlebird, from extinction. 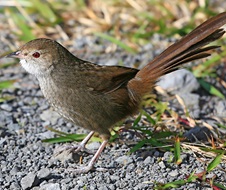 NSW Department of Planning, Industry and Environment Senior Threatened Species Officer Kelly Roche said there are only around 2500 Eastern bristlebirds remaining in the wild, most of which occur in small, isolated populations across eastern NSW and southern Queensland.

"Small, disconnected populations can suffer from low genetic diversity, which compromises their ability to breed and leaves them extremely vulnerable to threats such as wildfire, habitat loss, disease and climate change impacts.

"With so few birds remaining, we've reached a critical point where we must pull out all the stops to bring this endangered bird back from the brink, before it is too late.

"That's why under the Saving our Species program we are taking advantage of a cutting-edge conservation technique known as 'genetic rescue' in a bid to turn the tide on Eastern bristlebird extinction in New South Wales.

"We have gathered samples from wild Eastern bristlebirds across their entire range, including just last week on the North Coast, to obtain information on the genetic characteristics of each population.

"We will use this knowledge to selectively breed birds from different populations, with the aim of improving disease resistance, increasing genetic diversity and lifting fertility rates, particularly in the smallest population of birds located in northern NSW.

"The end goal is to see resilient populations of healthy birds, able to sustain population growth in the wild," said Ms Roche.

Along with genetic rescue NSW Government threatened species experts will continue to implement on-ground habitat management actions which are also helping to reverse the decline.

The genetic rescue project is being undertaken in collaboration with Currumbin Wildlife Sanctuary (CWS), Cesar Australia, the Victorian Department of Environment, Land, Water and Planning (DELWP), University of Queensland, Parks Australia and the Australian Department of Defence.

Rare mother and calf captured on camera for conservation