New Year’s Eve celebrations in Sydney marked the start of a very special year across the state as the NSW National Parks and Wildlife Service (NPWS) celebrates its 50 year anniversary. 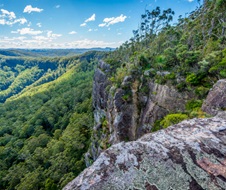 Office of Environment and Heritage Acting Chief Executive, Michael Wright said it was a fitting tribute to have the special NPWS 50th anniversary banner projected on the Sydney Harbour Bridge pylon last night.

“In the five decades since the establishment of NPWS, dedicated staff and volunteers have been conserving and protecting the natural and cultural landscape for the people of NSW,” said Mr Wright.

“Amazing landscapes across the state, rich in cultural and natural heritage, protected in national parks are the important and permanent features that help make this state special.

National parks continue to be the bedrock of nature tourism in NSW. In the past year they have welcomed over 39 million visits, and achieved a 94% visitor satisfaction rate.

“One of the most outstanding achievements of NPWS has also been the establishment of 29 Aboriginal joint management agreements covering more than 25% of the parks system in NSW, where the government and local Aboriginal people share responsibility for a national park's management,” Mr Wright said.

“We work together with Aboriginal and local communities to protect the national parks system and look forward to continued collaboration.

“NPWS was established in October 1967 to manage a system of national parks, state parks and nature reserves.

“In all there are now 872 reserves covering over 7 million hectares, more than 8% of the land area of NSW.

“The NPWS 50th anniversary celebrations aim to increase awareness and support of NSW national parks through visitation and social engagement.

“From January to December 2017 there will be opportunities to celebrate the stewardship of NSW’s most significant natural areas and the work achieved by NPWS and key partners such as Aboriginal and local communities.

“There have been significant achievements over the last 50 years in conserving and managing our national parks and I look forward to national parks being inspirational places for the people of NSW to experience the natural environment for another 50,” Mr Wright said.

‘Name game’ to bring NSW’s threatened plants into the spotli...