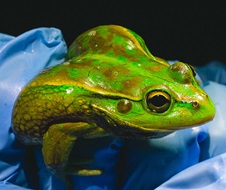 Survey results announced ahead of World Frog Day (20 March), indicate that this green and bronze amphibian, one of Australia’s largest frog species, has thrived over summer with carefully managed environmental water flows.

“Not only have we heard the frogs calling from most of our 42 priority conservation sites this season, they have also turned up at wetlands on private properties near Coleambally and Balranald where they have never been heard before.

“The southern bell frog requires wetlands that fill over spring and summer and hold water for several months in order to breed successfully.

“Water for the environment filled wetlands in the Murrumbidgee and Murray Valleys in spring last year, just in time to kick off the Southern Bell Frog’s breeding season.

“Thanks to these well-timed flows, environmental water managers, irrigators and private landholders have been able to replicate the optimum breeding conditions for this endangered species.

“With the support of landholders we’ve been able to build a network of good quality wetlands that allow this iconic species to breed, move around the landscape and thrive,” said Dr Waudby.

Moulamein-based landholder Paul Martin said that it is important from a farm context to have diversity and they have kept up the water to their wetland on their property.

“On a nice calm evening you can really hear the wetland come to life and it’s not just the frogs, you’ll see birds on the edge and all the insects, so the cycle starts to happen,” Mr Martin said.

Annual Southern Bell Frog monitoring is conducted as part of the NSW Government’s Saving our Species program at priority conservation management sites across the Murrumbidgee and Murray regions.

20 March marks World Frog Day, an annual observance of these fascinating amphibians. It was created in 2009 to increase awareness of the plight of frog species around the world.