The wild population of one of Australia's rarest birds is being boosted after the release of 50 conservation-bred birds on Wonnarua Country in the Lower Hunter Valley this week. 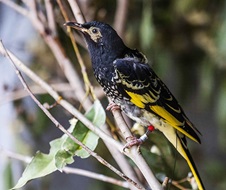 "The regent honeyeater used to flock in its thousands from Queensland to South Australia, but now there are only around 300 birds left in the wild," Mr Griffin said.

"We're releasing conservation-bred birds to boost numbers in the wild as part of a national effort to save this critically endangered species.

"The ability for the regent honeyeater to sing and call is vital to attracting a mate, and the introduction of the Taronga Zoo-bred birds will give these wild birds the chance to learn their songs again, find mates and ensure the species can survive and thrive into the future."

In 2021, 58 regent honeyeaters were released in the Lower Hunter Valley, and breeding activity was documented along with assimilation of zoo-bred birds into wild flocks.

Mindaribba Local Aboriginal Land Council (LALC) CEO Tara Dever said the successful release on Mindaribba LALC land reflected the deep and intergenerational relationship between the birds and the Country at the foot of Mount Tomalpin.

"This Country, like its People and this wonderful bird, has survived massive change and upheaval over the past 250 years," Ms Dever said.

"While conditions need to be just right, to ensure the birds have enough food and shelter, the deep connection between First Nations People and this land has assisted with the success of the release."

"Over the past 20 years, Taronga has refined its approach to conservation breeding and increased our understanding of this beautiful and rare species," Ms Sluys said.

"By integrating science and husbandry, we have been able to determine which factors – such as song-tutoring and building pre-release fitness – best assist in post-release survival of zoo-bred birds."

BirdLife Australia's NSW Woodland Bird Program Manager Mick Roderick said around 39 birds will be monitored for up to 10 weeks by BirdLife Australia thanks to support from the Commonwealth Environment Restoration Fund and the NSW Government's Saving our Species program.

"It's incredibly rewarding to see zoo-bred birds form mixed flocks with wild birds, and to know this fledgling flock is supported by so many agencies, groups and communities across Australia."

The community is encouraged to report any sightings of regent honeyeaters to BirdLife Australia on woodlandbirds@birdlife.org.au or 1800 621 056.

For more information on the conservation work to save regent honeyeaters visit Regent Honeyeater (Anthochaera phrygia).

From the lab to the courtroom, our scientist's role as exper...

The dirt on our soils archive

The bag on our marine debris research

Meet the science experts working hard for our environment

Calls for expressions of interest for Environmental Research...