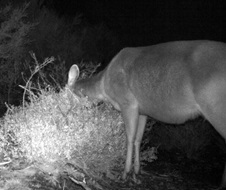 "Controlling feral deer in the park is a critical priority for NPWS," said Mr Neilly.

"Deer cause damage to native habitats through grazing, browsing, trampling and wallowing.

"Last month's operation saw highly trained, skilled staff remove deer from a 2000-hectare section of the park that was burnt by wildfire in 2018.

"Deer are impacting native plants and native habitats recovering from fire in this part of the park, including the Littoral Rainforest Threatened Ecological Community.

"The area has limited trails and is not suitable for effective ground shooting so an aerial operation was conducted in accordance with the highest safety and animals welfare standards.

"Independent expert advice is that aerial control is a humane method by for managing invasive pest animals and the operation was controlled by strict operational procedures that prioritised staff and visitor safety.

"NPWS has undertaken regular deer control in Royal National Park since 2002 and will continue to utilise both ground and aerial control methods to reduce the impact of feral deer on the environment and the community," Mr Neilly said.

Feral deer populations continue to expand across different land tenures and now occupy an area covering around 22 per cent of NSW, up five per cent from 2016.

They pose a significant threat to the survival and recovery of native vegetation, especially after fire.

Following last summer's bushfires, NPWS is implementing the largest feral animal control operation in its history to give native plants and animals the best chance to recover.