A heavy winter storm which closed the Coolah Tops National Park has left a dangerous legacy. 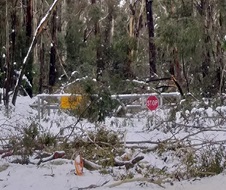 The National Parks and Wildlife Service staff and contractors are working carefully to remove trees and branches that were torn off during a ferocious blizzard in June in a massive clean-up effort.

Area Manager John Whittall said thousands of trees were damaged by the 100 kph wind blasts and 15 cm of snow slamming into the popular national park 258km north west of Sydney.

“Sadly, the work has to be slow and painstaking to ensure the area’s safe to re-open for visitors because in many instances the hanging timber can’t be reached by our machinery,” Mr Whittall said.

“We have opened up some of the roads with heavy plant, but there are many trees that are being stopped from falling by other trees and broken branches dangerously hanging up above the roads and camping areas.

“If any of those were to come down on someone’s car while driving, or tent while camping, there would be tragic results.”

After the storm many roads and visitor areas were covered with fallen branches, trees and debris, so the priority was to get to the visitor sites to estimate the extent of the damage.

Heavy equipment continues to open fire trails ahead of the summer bushfire season while specialist arborists are helping Park staff deal with the dangerous trees and limbs.

“The park will be progressively re-opened with a target of all visitor areas open by Easter next year,” Mr Whittall said.

“The park is only accessible to authorised personnel, including NPWS Staff, contractors, and emergency services but do check for updates at: Coolah Tops National Parks.”