As the holiday season approaches authorities are reminding people that illegal parties on beaches and in national parks will not be tolerated. 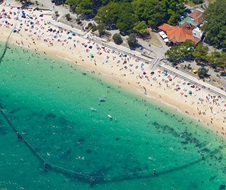 The National Parks and Wildlife Service (NPWS) and NSW Police will be undertaking patrols and people will face penalties or court attendance notices for breaches.

NPWS Director Deon van Rensburg said it is great to see people getting out and enjoying our wonderful national parks however, activities such as illegal parties are creating disturbance for other park users and neighbours, can damage the environment and often result in unnecessary and expensive clean-ups.

"There is also a significant safety risk to people that attend these parties as they are often held at night and associated with drug and alcohol use in areas where the consequences of slips, trips and falls can be extreme," Mr van Rensburg said.

"Illegal party organisers face penalties, seizure of their equipment and clean up or site rehabilitation costs."

Eastern Beaches Police Area Commander, Superintendent Rohan Cramsie, said unauthorised parties of this type will not be tolerated and pose extremely serious safety risks to both individuals who attend and police responding.

"This is a public safety issue. We are more than happy to work with and support event organisers to hold well organised dance parties in the Eastern Beaches area.

"But unauthorised parties are anything but safe. There is no security to intervene in the event of an emergency, such as an altercation between persons attending. Also, there is no monitoring of current COVID requirements.

"The local community is being impacted by noise, rubbish and intoxicated people right through to the morning.

"Police will continue to work closely with officers from Randwick City Council and the National Parks and Wildlife Services to target these events and prosecute offenders accordingly."

Mr van Rensburg said illegal parties can have negative impacts on the environment, buildings and structures as well as other park users and neighbours.

"Where authorities become aware of the intention to conduct an illegal dance party in a park, we will attempt to contact the organisers where possible and advise them that the dance party has not been consented to.

"Parks may be temporarily closed to restrict the establishment of an impending illegal dance party.

"People who become aware of a planned illegal party or suspect that one may be setting up in a national park should contact their local NPWS office, Police or Crime Stoppers," Mr van Rensburg said.