Local residents and visitors to the Clarence Valley region are being asked to help protect local wildlife by leaving their pets at home when heading to Angourie Bay picnic area and Back Beach. 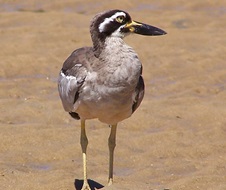 National Parks and Wildlife Service (NPWS) are reminding visitors to the popular weekend and holiday activity spot that the area is part of the Yuraygir National Park and that dogs and other pets are not permitted anywhere in the park or in nearby Clarence Estuary Nature Reserve in Yamba.

“National parks and nature reserves provide vital habitat for wildlife and we need to ensure these spaces remain a safe refuge for the native animals which call our parks home,” said NPWS Ranger, Grant Wilcock.

“A number of native species reside in this region, including threatened shorebirds such as the critically endangered Beach Stone-curlew, the Little tern, Pied Oystercatcher and Sooty Oystercatcher.

“We are now heading into their critical nesting period when stress caused to these birds could seriously affect their feeding which can only occur during low tide. Disturbances may also result in birds being frightened away from their nests, potentially leaving their eggs or chicks unprotected and exposed to further threats.”

Signs reminding visitors of the rules around dogs not being permitted in the national park are located at park entrances and in the carparks, and anyone neglecting to follow these regulations risks being issued with an on the spot fine.

“We know there is a high level of awareness amongst the local community regarding the rules and we appreciate that most people are respecting these regulations. However, some people are unfortunately ignoring the signs and continue to walk their dogs through the restricted areas and in some cases, even leave their dogs unattended while they go for a surf or a swim,” said Mr Wilcock.

“We want locals and visitors to our community to enjoy and make the most of their time spent in our beautiful national parks while also respecting the need to protect our precious local wildlife.”

Members of the public can call the NPWS general enquiry line on 1300 361 967 to report any breaches of the regulations.

Assistance animals are permitted in national parks subject to the terms listed in the NPWS Pets in parks policy.

A new national park for NSW