The NSW Government’s Saving Our Species program is appealing to residents and visitors to Harrington and Old Bar to help protect the endangered pied oystercatchers and their young this spring, with nesting season now in full swing on the Mid North Coast. 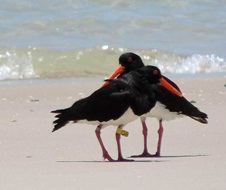 “Pied oystercatchers are familiar to many of us who visit the beach. With their striking black-and-white feathers and vivid red bill, they are hard to miss,” said Ms Howard.

“They are a fascinating, and really quite romantic, species. Once they’ve found their mate, these birds rarely stray too far from their partner.

“Sadly, these special shorebirds haven’t had a great run with their breeding seasons over the past few years.

“The significant loss of eggs and chicks that we saw in 2019 was largely due to predation by people’s pets, with 14 eggs and at least one chick taken by off-leash dogs.

“While three pied oystercatcher chicks have already hatched successfully this season, and another five eggs are looking promising, the birds continue to be under threat, especially with the extremely high visitation we’re experiencing on Manning beaches these school holidays.

“With a large number of visitors comes an increased risk of eggs and chicks being trampled by humans or destroyed by 4WDs.

“We’re appealing to beachgoers to respect these special birds and give them the space they need to breed safely. With a little bit of consideration from us, their chances of breeding success are much higher.

“Temporary fencing has been installed for the summer around the breeding grounds for pied oystercatchers and little terns at Harrington and Farquhar Inlet. Additional ‘island’ fences may also be constructed around individual nests, as necessary.

“The fenced nesting areas are closed to people, dogs and cars.

“Keep yourself, and your dog, out of fenced nesting areas; only drive below the high tide line on designated 4WD beaches; walk dogs on leash, and only on designated dog beaches; walk close to the water to avoid stepping on a chick; and don’t approach, camp near or chase shorebirds as frightened birds leave eggs unguarded.”

Pied oystercatchers lay two to three eggs per season in nests which consist of shallow scrapes in the sand above the high tide mark, often in amongst seaweed, shells and small stones.

Maps of dog exclusion zones are available on the MidCoast Council website.