The National Parks and Wildlife Service (NPWS) is planning to undertake a routine aerial shoot operation next week targeting feral pigs in the central and northern sections of Kosciuszko National Park. 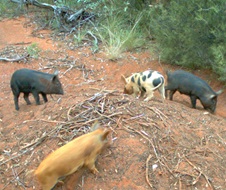 “This operation is part of the region’s integrated pest management program and will see the NPWS chopper ParkAir working in Kosciuszko for three days,” said Mr Pettitt.

“Aerial shoots, carried out in conjunction with ground based control techniques such as trapping, poisoning and shooting, are used throughout the park to control pigs, as well as deer and goats.

“Horses are not targeted as part of this program.

“This particular shoot is funded by the NSW Government’s $100 Million Saving our Species Program and aims to minimise the impact pigs have on some of the Park’s threatened native plants and animals.

“The operation will target pigs at locations where they have the potential to negatively impact threatened species such as the Corroboree Frog and Max Muellers Burr Daisy.

“It is hoped that this operation, along with a range of other protection measures will help to conserve the many important threatened species in Kosciuszko into the future.

“The operation planned for next week takes advantage of the current conditions. Winter is typically a suitable time of year to target pigs as they are often easier to detect from the air in the wet and snowy conditions,” Mr Pettitt said.

The operation follows a similar program undertaken in June 2016 that successfully targeted goats, pigs and deer.