Plastic marine pollution to be tackled

An initiative to protect oceans and marine life from micro-plastic pollution, which kills seabirds and is ingested by sea-life, was launched today at the Royal Botanic Gardens. 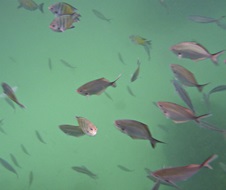 Environment Minister Rob Stokes joined HRH Princess Laurentien of the Netherlands, the President of Fauna & Flora International (FFI), to launch the organisation’s initiative to team up with other NGOs, governments and businesses to work to eliminate sources of micro-plastic pollution in Australia.

“FFI is collaborating with businesses working in Australia and Australian cosmetic and beauty care producers to seek the removal of micro-plastic pollutants from their products,” Mr Stokes said.

“Micro-plastics measure less than 5mm, include non-biodegradable plastic found in many products such as shampoos, exfoliants and shower gels go down our sinks straight into the ocean.

“Once seabirds ingest micro particles it can lead to blockages, choking and starvation.

“Scientists around the world are worried about the health implications to humans who eat seafood contaminated by micro-plastics.

“When microplastics enter the marine environment, due to their small size and ability to float, they are unlikely to ever fully degrade.”

“FFI also aim to introduce a new free smartphone app to Australia later this year which will make it possible for consumers to scan a product barcode for the presence of plastic.”

Also today, as a symbol of our collaborative conservation efforts to maintain plant biodiversity, the Princess planted the Chrysophyllum imperiale tree which is listed as endangered on the IUCN Red List of Threatened Species.

The tree, from the rainforests of Brazil, is rare in its natural habitat and is unlikely to found outside of a small number of botanic gardens.