The Department of Planning and Environment has issued a plea for Berry and Shoalhaven communities to help protect endangered grey-headed flying-foxes which have re-formed a camp in the area. Crucially, the camp supports babies that are entirely dependent on their mothers. 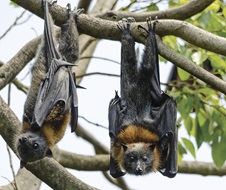 'Grey-headed flying-foxes are a threatened species that have experienced a sharp decline in their population across Australia. They play a vital role in eucalypt pollination and tropical seed dispersion which can help with the subtropical rainforest in the area,' said Lorraine Oliver, Ecosystems and Threatened Species Acting Senior Team Leader at Department of Planning and Environment (the Department).

'The property owners and the surrounding community of the Berry camp have worked closely with Shoalhaven City Council and the Department to find the best ways to cope with living so close to a flying-fox camp. Saving our Species specialists at the Department and the Council have organised vegetation removal, funding of pool covers and high-pressure hoses, while being careful not to harm or disturb the flying-foxes, and further information for the community is available online,' Ms Oliver said.

'We know that living near a flying-fox camp can sometimes be difficult as they can be noisy, smelly and sometimes their droppings land on clothes, cars and outdoor areas. However, extensive research has shown there is no way to move a flying-fox camp without risking them forming a new camp in a nearby location, causing more residents to be impacted,' she said.

'Importantly it is best to avoid disturbing the flying-foxes during the day as this stresses the animals and causes them to fly, swirl and screech. It can also lead to the death of their babies when they are accidently dropped by their mothers. Residents are asked to report any disturbance of the camp to the Environment Line on 131 555.'

The flying-foxes in the Shoalhaven area have likely travelled from the Hunter and North coast regions chasing food such as eucalypt nectar, rainforest fruits and, more and more frequently, the fruit grown in suburban gardens. They generally arrive in the Shoalhaven area in early summer and leave close to winter, but this depends on whether there are good food resources elsewhere.

Tragically this flying-fox camp was also the site of two heat stress incidents where the animals were affected by extremely hot temperatures and many hundreds of them died. The Department is working closely with Council and local wildlife carers to finalise a response plan to support residents and the flying-foxes should another heat stress incident occur in the camp.