Once struggling from drought conditions, Kooragang Island has recently become a veritable frog haven, and vulnerable populations are thriving. 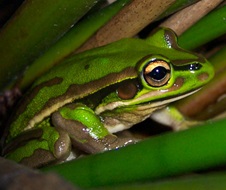 Saving our Species staff and bush regeneration volunteers combined their efforts to improve the habitat of species such as the green and golden bell frog, following a period of prolonged drought.

"Frogs in this area were greatly affected by low rainfall, so the idea was to enhance their habitat through plantings and weed removal and make it easier for them to move across the landscape and access the available wetland habitat across the island," he said. "Luckily, we did get some rain, and this has greatly benefited the frog populations and improved the odds of survival.

"Volunteers play a major part in threatened species conservation, not only with their contributions to on-groundwork, but also in other ways, such as reporting sightings of threatened species which help researchers track what is happening with species over time. They bring so much energy and passion to their work, and their efforts are much appreciated.

"This work will improve terrestrial habitat long term, support the booming population, and assist in the ongoing survival of frog species."

National Parks and Wildlife Service (NPWS) will continue to work with Hunter Local Land Services and Conservation Volunteers Australia to prioritise the ongoing recovery of the frogs.