A new technique is being trialled by ecologists on the NSW's far south coast to find the elusive long-footed potoroo, and it stinks. 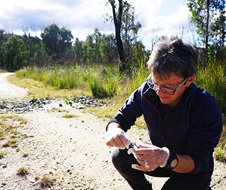 Minister for Environment James Griffin said scientists are searching for evidence of the critically endangered species by searching through the poo of their predators, which include cats, foxes, dingoes and quolls.

"While it's a crap job, this new technique is also an innovative way to find out whether the long-footed potoroo is still present in the South East Forests," Mr Griffin said.

"While we know this species inhabited forests in the State's south-east in the early 1990s, the long-footed potoroo has not been detected since then in New South Wales and we've never done a long-term survey to confirm whether they still exist.

"Finding long-footed potoroo DNA in predator scats would confirm the species still exists in New South Wales and be a huge step forward for our conservation efforts.

"With the species on the brink of extinction and traditional survey methods failing to find the animal, there has never been a better time to think outside the box and trial this detection method."

The long-footed potoroo is one of several likely locally extinct species that will be reintroduced to the NSW Government's Nungatta feral-free rewilding site in South East Forest National Park, near Bombala.

Not to be confused with the long-nosed potoroo, which is still found in some areas of the NSW south-east, the long-footed potoroo was last recorded through hair samples in the early 1990s.

Over the next year, scientists from the NSW Government's Saving our Species program will collect 1,000 predator scat samples from South East Forest National Park.

They will use environmental DNA technology (eDNA) to analyse scats and confirm if the long-footed potoroo still exists in their known habitat.

This work is part of the NSW Government's Saving our Species program, which is backed by a $175 million commitment over 10 years.

"I can't say picking up poo is the most glamourous thing I have done in my career, but it's an important new technique that may help us find species that are difficult to survey," Dr Bentley said.

"We hope to eventually collect 1,000 scat samples and have partnered with EnviroDNA in Melbourne. We expect the results within 12 months with the best-case scenario identifying evidence of this elusive species.

"Either way the results will still give us an excellent understanding of the animals currently living in these forests and complement our existing understanding of species distribution, which will help inform the south coast's first rewilding project."