In northern NSW, fire is being used to maintain habitat for the threatened eastern bristlebird. 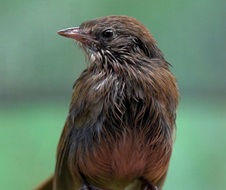 The eastern bristlebird (Dasyornis brachypterus) is an endangered rare species, and within the northern population there are fewer than 40 individuals left in the wild.

The northern birds require low tussocky grasses for breeding, and so frequent fires are essential to maintain essential habitat.

Threatened Species Officers with the Saving our Species program have teamed up with landholders and the NSW National Parks and Wildlife service to undertake prescribed ecological burns on private property near Kyogle where the species is known to occur, ahead of the eastern bristlebird breeding season.

It is hoped that by maintaining the grassy understory in key habitat areas, in conjunction with other actions including a captive breeding program, the conservation outcomes for eastern bristlebird will be improved in the long term.