Authorities are confident the Little Penguins on Lion Island will give the "flippers up" of approval for twenty new handmade burrows being installed to improve the colony's nesting habitat at the mouth of the Hawkesbury River. 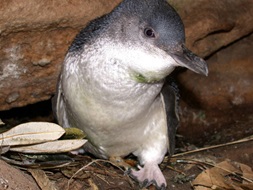 NPWS Director Deon van Rensburg said after a lightning strike caused a fire on the island last year the community was very concerned it may have impacted the penguin colony.

"NPWS monitoring since the fire has recorded penguins successfully however installing these new burrows will improve the nesting habitat of the Little Penguins on the Island.

"The ongoing conservation management of Lion Island to protect this important colony of Little Penguins by the NPWS, with the help of LLS and the community, has been terrific.

"This is no ordinary program and these are no ordinary burrows – they are superior "penguin-friendly" burrows in comparison to previous models which have been installed along the NSW coast for decades.

"They have been developed to be weather and fire resistant, as well as having improved thermo-regulation and preventing predators such as goannas preying on eggs and chicks – they really are prime penguin real-estate so I am expecting it to go fast!

"NPWS bird specialists have found the earlier plastic and timber designs to have problems such as rotting and poor thermo-regulation," Mr van Rensburg said.

Designed and developed by not-for-profit group, 'Fix It Sisters', these new Little Penguin homes were created to stand the test of time as penguins breed for life and will continue to return to the same burrow each breeding season.

Habitat on the island is also being protected and maintained through bush regeneration, thanks to a NSW Local Land Services (LLS) grant of $17,885 and a Floating Landcare initiative, which sees volunteers visit the island twice a year to undertake habitat restoration.

Little Penguins mostly mate for life, but about 25% of them may change their partner from year to year.

Between June and August, male penguins return to their colonies to reconstruct old burrows, dig new ones and attract mates so NPWS will be waiting eagerly to see how popular the new burrows will be.

Plastic marine pollution to be tackled