Promising signs a very rare and vulnerable species of wattle at Gundabooka National Park near Bourke is better protected following a project under the NSW Government’s Saving our Species program. 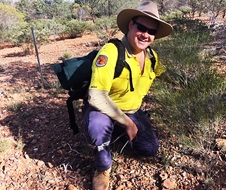 “With just 200 curly-bark wattle plants in Gundabooka, we were concerned about potential impacts on the plant from feral pests such as goats.

“Despite a comprehensive goat control program in the park, this precious population needed extra protection.

“NPWS staff from across areas of the northern inland converged on Gundabooka to construct a 57 hectare goat-proof fenced area within the park in June last year.

“The fencing project came after Bourke NPWS staff and local Aboriginal traditional owners worked to assess the impacts of a fence on native plants, animals and cultural heritage value.

“This assessment recommended fencing be established to protect curly-bark Wattle and other species.

“Monitoring now shows that the area has good groundcover and there is a diversity of plant species within the enclosed area.

“Recent rain saw the plants flower and germination of curly-bark Wattle from the seed bank is being closely monitored.

“Annual population monitoring of this species is planned for August and we are hopeful it will continue to show the fence is benefitting the plant as well as other species and biodiversity in the park.

“This project has been completed under the NSW Government’s $100 million Saving our Species program, and will help us to better understand, manage and monitor the threats facing this species,” Mr Faris said.

Curly-bark Wattle grows in Acacia shrubland and mallee and is a broombush-like shrub to 4 metres tall, with long wispy branchlets and a very characteristic, reddish-brown, curling fibrous bark.