This month, Saving our Species is celebrating our success through teaming up with Bush Heritage Australia. 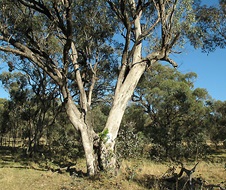 This article delves into how Bush Heritage Australia has been nursing Tarcutta Hills Reserve’s precious Grassy White Box Woodlands back to health – helping protect and support over 100 bird species, and many other plants and animals. We explore how this essential work has recently been expanded through the purchase of crucial neighbouring land, the significance of this project, and what the future of Saving our Species (SoS) and Bush Heritage looks like.

Bush Heritage Australia is an independent not-for-profit that buys and manages land, and partners with Aboriginal people, to conserve our iconic landscapes and native species. Their work focuses on priority landscapes – areas chosen based on national biodiversity priorities, locations of existing reserves and opportunities for strategic partnerships.

For Damon Basset, Bush Heritage Field Officer at Tarcutta Hills Reserve, biodiversity is everything. He said, it’s the “mind-blowing variety of life, woven together to create an amazing (resilient, yet fragile) sustainable system that never stops teaching and telling us more”. It’s this passion that drives him and the wider Bush Heritage team to conserve and nurture our natural environment.

Bush Heritage collaborates with a range of partners – from private landholders to conservation groups across Australia – that share their vision of ‘healthy Country, protected forever’. This goes hand-in-hand with SoS’ objectives to increase the number of threatened species that are secure in the wild in NSW for 100 years, and control the key threats facing our threatened plants and animals. Our combined belief that true conservation impacts are achieved together make this partnership particularly purposeful (say that 10 times quickly!).

Key threatened Grassy White Box Woodlands, which were once part of a network covering 10 million hectares of south-eastern Australia, have been extended by around 70 per cent thanks to a recent settlement with Bush Heritage. Various changes to the landscape have had intensely negative impacts on these woodlands, with experts asserting that they’re now one of the most highly fragmented and poorly protected ecosystems in Australia. Tarcutta Hills Reserve near Wagga Wagga, NSW, is one of the only remaining areas containing this critically endangered ecological community.

According to Bush Heritage, over 100 bird species, many of them endangered, still feed and forage at Tarcutta, such as swift parrots, turquoise parrots, brown treecreepers, superb parrots, speckled warblers, black-chinned honeyeaters, hooded robins and diamond firetails. The reserve is a haven for many seasonal migratory birds seeking ‘steppingstones’ of habitat as they move across the landscape – sometimes even a single tree can provide such a steppingstone between two wooded areas separated by cleared land. Tarcutta Hills Reserve also protects other animals and plants, such as echidnas, wombats, possums, microbats, gliders, frogs, and Murnong or yam daisy, grass tree, white cypress pine and many orchid species. Importantly, it’s providing many ecosystem services like pollination, nutrient cycling and regulating air quality.

Damon said, “Despite Tarcutta being surrounded by a heavily cleared agricultural landscape and the associated ecological pressures (from weeds and feral animals for example), there is a complex, natural resilience that’s enabling native plants and animals to persist and thrive.”

“I am lucky enough to work on Wiradjuri land at Tarcutta Hills Reserve and experience the rich biodiversity of the nationally significant and critically endangered White-box Woodland there. Feeling it’s daily and seasonal rhythms, watching and hearing its responses and trying to work respectfully and consciously with all of that as we undertake our work”, he said.

Tarcutta Hills Reserve has been managed by Bush Heritage with the help of the Saving our Species Co-investment Grants Program since 2018 – a co-investment partnership that included the prospect of broadening the significant site when possible. 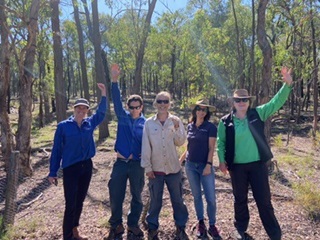 Late last year, Bush Heritage purchased a 288 hectare parcel of neighbouring land, extending the reserve to 720 hectares in total. This land is known as the Woodleigh Block, and is home to a rare, large and healthy critically endangered ecological community of ‘White Box - Yellow Box - Blakely’s Red Gum Grassy Woodlands and Grasslands’ – quite the mouthful for such a small population. This special piece of land also provides habitat for woodland birds such as the swift parrot, diamond firetails and several species of robin.

Almost 90% of Australia’s temperate woodlands have been cleared since European settlement, leading to the decline of dozens of woodland bird species, but Tarcutta Hills and its new extension have remained relatively unscathed – although there is still lots of work to be done to ensure it can survive and thrive.

Damon explained, “There’s much to do over time as Bush Heritage staff, Traditional Owners, specialist contractors and volunteers begin restoring and monitoring of the cleared, agricultural parts of the land back onto a path that will hopefully become complex and biodiverse Grassy Woodlands in the future.”

The three-year project focusses on a range of measures to better enhance and extend White Box Woodlands and threatened woodland bird habitat. Bush Heritage has been successfully managing threats to the ecological values of the reserve since 1999 (including feral animal control, weed control, fire planning and revegetation) and established a network of flora and fauna monitoring sites – all vital actions that are now successfully being extended to the Woodleigh Block.

If more and more people come together and support impactful conservation organisations like Bush Heritage, we have a chance of preserving our unique and precious country, along with its exceptional plants and animals.

As Damon said, “Hopefully in the future as we begin to halt and turn around species decline, the work of SoS begins to slow down!” – we hope so too Damon.