Primary school ‘botanists’ have recently had the unique opportunity to lend a hand in the Denman Pomaderris translocation project. 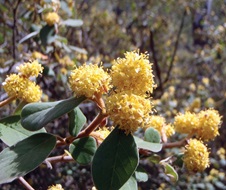 The critically endangered Denman Pomaderris (Pomaderris reperta) is getting a new lease on life thanks to a recent translocation project. The plants were grown at the Australian National Botanic Gardens (ANBG) from a seed collection gathered at Myambat in Denman in 2016. The aim of the project is to work with the Denman community to establish self-sustaining populations to reduce the risk of extinction, gain valuable insights to assist future translocations, and promote conservation of the species within the community.

At the heart of Saving our Species’ (SoS) purposeful partnerships is collaboration to have a greater impact on threatened species. Bringing a species back from the brink of extinction is no easy feat, and often requires people, resources and dedication over time. The Denman Pomaderris translocation project, sponsored by Glencore, included translocating 250 seedlings to a Glencore-owned rehabilitation and offset site, as well as student planting days at primary schools in the region – St Joseph’s Primary School and Denman Public School.

Media and Community Relations Officer for Coal Assets Australia, Glencore, Tracey Snedden said, “At Glencore, we aim to create meaningful change through community partnerships and initiatives like Saving Our Species. We are delighted to be in a position to support this project, which aims to establish a self-sustaining population of the endangered Denman Pomaderris and reduce its risk of extinction.”

As part of the venture, St Joseph’s Primary School and Denman Public School students have recently had the remarkable opportunity to become a ‘Botanist for a Day’. An interactive digital program was developed by education technologists at Culture Tech, a team of educators and technology specialists focused on delivering 21st century tech-enhanced learning at schools, along with SoS staff, to creatively capture students’ understanding via modern mediums such as video, drawings, and photography.

Assistant Principal at Denman Public School Jake Sawyer said, “Fantastic initiative for all involved, the students absolutely loved engaging with the research material and building their understanding of the Denman Pomaderris. We cannot wait to present our ongoing findings and raise further awareness through our school and local community."

The ‘Botanist for a Day’ activities at the schools included the creation of a digital ‘Botanists Notebook’ and the schools’ very own nature documentary. Students also planted Denman Pomaderris seedlings within their school grounds that they will continue to monitor to conserve the species.

Year 6 Student Jade from St Joseph’s Primary school said, “We learnt that the Denman Pomaderris is critically endangered. We found out what threatens the species. We also got to measure the plants with the iPad app, that was pretty cool! “

The Denman Pomaderris translocation project was made possible through a partnership between the Saving our Species program (SoS) and Glencore Coal Assets Australia. The translocation of plants onto the Glencore-owned Mangoola coal mine, including rehabilitation and offset areas, occurred on 5 November 2020.

The Denman Pomaderris is listed as Critically Endangered in New South Wales and is only known from a few areas near Denman in the Muswellbrook Shire Local Government Area.

Find out more about the Denman Pomaderris or the Saving our Species program and how you can join the movement to help.