This month, we had a chat to Head of Healthy Land and Seascapes for WWF-Australia, Darren Grover. We asked what initially inspired him to get involved in conservation, what makes WWF-Australia unique, and touched on some exciting and partnership projects we are currently working on. 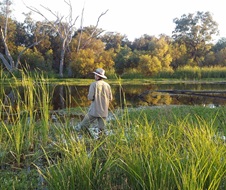 WWF’s global mission is to stop the degradation of the planet’s natural environment and to build a future in which humans live in harmony with nature. You have probably heard the WWF name being thrown around at some point – and rightfully so – the WWF International network is the world’s leading independent conservation organisation.

Founded in 1961, the WWF International Network are active in over 100 countries and have close to five million supporters internationally. WWF has been working for more than 40 years to conserve biodiversity in Australia and throughout the Oceania region. Recently, their focus has been on vital bushfire recovery and has involved working to save iconic species such as the koala and platypus, but also lesser known species such as gliders, rock wallabies, flying foxes, potoroos, lyrebirds – and even native rodents. Like Saving our Species (SoS), they work closely with governments, businesses and communities, so that people and nature can thrive within their fair share of the planet’s natural resources.

For Darren, having the role of Head of Healthy Land and Seascapes and leading the Species, Oceans, Landscape Restoration and Social Development teams at WWF-Australia, is living his boyhood dream. He has been passionate about wildlife from an early age, with aspirations to save our most threatened species and maybe even re-discovering extinct ones. His geographically dispersed team delivers projects that seek to improve the conservation status of species across our magnificent country. His zest and experience couldn’t be better suited for his role, with nearly 20 years' experience in species conservation, environmental impact assessment, Indigenous education and land management, and the development of environmental and water policies.

When asked what biodiversity means to him, Darren confessed, ’I don’t often use the term ‘biodiversity’ as most people are not familiar with it, so I usually use ‘wildlife’ or ‘plants and animals’; although, I do believe that it encapsulates all the living things in a certain area – plants, insects, birds, mammals, reptiles, frogs, worms, fish, snails, and everything else. All playing a role in the functioning of an ecosystem’.

There are hundreds of terms we could use to encompass the incredible intricacies of Mother Nature, but what matters is that we recognise its importance and work together to protect it. From microscopic algae to towering trees, every plant and animal has a role to play in creating a healthy natural environment and needs our protection. Seeing a small shrub or tiny lizard going extinct may not seem significant, but losing these species would create holes in our ecosystem and have a butterfly effect on biodiversity, which can negatively impact air and water quality, pollination, pest control and even the economy, making the work that organisations like WWF-Australia do vital. It is also work that cannot be done by any one organisation alone.

WWF-Australia and SoS have partnered on a wide range of vital conservation projects, including: 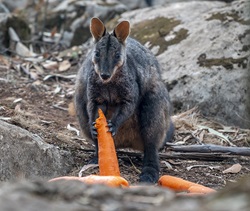 Tens of thousands sweet potatoes and carrots were flown by helicopter into NSW national parks impacted by the 2019-2020 bushfires, with Woolworths, Foodbank and WWF-Australia banding together to support the NSW Government’s aerial food drop program. This collaborative effort enabled us to sustain threatened species in the bushfire-affected areas, such as the brush-tailed rock-wallaby.

For Darren, this impactful project has been the highlight of working with SoS so far. He said, ‘Operation Food Drop was a great collaboration and fantastic results – and who can forget the images of rock wallabies munching on carrots!’ 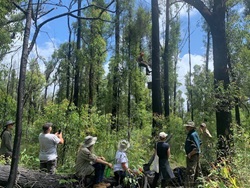 The 2019–20 bushfires destroyed many hollow-bearing trees, leaving hollow-dependent animals like the threatened squirrel glider, powerful owl and turquoise parrot without safe homes for shelter and nesting.

To assist displaced animals, 111 nesting boxes were installed in 3 locations (Minyumai and Ngunya Jargoon Indigenous Protected Areas and Bundjalung National Park). This innovative project was made possible thanks to WWF-Australia, who provided $90,000 in funding. The nest boxes were designed by 2019 Wild Idea finalist WildBnB to ensure a scientifically robust framework and best practice model was built.

The results of this trial will inform future SoS conservation actions for other threatened species across New South Wales.

After having achieved so much together, why would SoS and WWF-Australia stop now?

Darren said, ‘I see a vibrant future for SoS and WWF. Sadly, more and more species are edging towards the brink of extinction and we all need to play a part in saving our wildlife and wild places. It's a big task and not one we can tackle on our own. But together we can’.

To keep up the momentum, SoS and WWF-Australia are in discussions regarding two new exciting projects that will continue to make a positive impact on threatened species conservation in NSW.

So, watch this space!

You can find out more about WWF-Australia and how you can get involved: WWF: Get involved.