A rare bird has found food and shelter in wetlands along the Murray River. 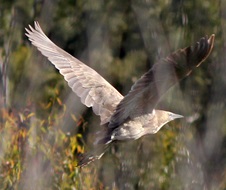 Endangered Australasian bitterns are 'booming' at dawn and dusk in the Barmah-Millewa forest.

The wetlands provide a safe haven for the secretive bird whose survival is threatened by habitat loss, drought and fire.

Ecologist Ian Davidson said the Barmah-Millewa wetlands on the Murray were one of the few remaining sites where Australasian bitterns could now be found.

'The loss of wetlands through drought is one factor, but the recent fire in the Macquarie Marshes - formerly a bittern hotspot - means remaining wetland refuge sites are more important than ever,' Mr Davidson said.

'For successful breeding, Australasian bitterns rely on treeless, reedy wetlands with water depths around 30 to 40 centimetres which provide shelter, food and protection from predators.

'This year, that type of habitat is extremely hard to come by and makes the Barmah Millewa wetlands vitally important to the conservation of the species.

'That's why it is vital to provide environmental flows to these small patches of habitat and ensure there are enough individuals to repopulate when better times return to our rivers,' he said.

Recent surveys have found Australasian bitterns at 12 of 16 sites in the Barmah Millewa.

Environmental scientist Vanessa Cain said most of the Australasian bitterns were heard calling in the Millewa wetlands.

'A total of 41 individuals were detected, with 31 of those in New South Wales,' Ms Cain said.

'Surveys were conducted at dawn and dusk when the birds are most vocal.

'It's the male of the species that you hear calling. We know each male has an average of 2 to 3 females in a harem which helps indicate the number of birds present at each site,' she said.

Wildlife ecologist Matt Herring said the Barmah-Millewa was the most important site for Australasian bitterns in the country.

'It doesn't get any better than Barmah-Millewa,' Mr Herring said.

'The Barmah-Millewa provides perfect habitat for Australasian bitterns. They hide among native plants like phragmites and juncus, build their nests there, and forage in shallow water at the edge of wetlands.

'The beauty of Barmah-Millewa is that it provides a patchwork of wetlands in close proximity so the birds can move from place to place with relative ease and feast on the fish, frogs and yabbies that also live there.

'All wetlands are part of a network and the bitterns stitch them together,' Mr Herring said.

Other important landscape-scale places for bitterns include the Kerang Wetlands in northern Victoria, the Great Cumbung Swamp on the Lachlan river and wetlands in the mid and lower Murrumbidgee. These critical bittern sites also receive targeted environmental flows.

Bottle Bend on road to recovery