An elusive underground orchid has been discovered in Barrington Tops National Park and National Parks and Wildlife Service (NPWS) Area Manager, Anthony Signor, is thrilled at the discovery. 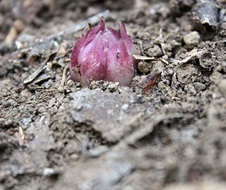 "Barrington Tops is known for harbouring a remarkable range of rare plants and animals, and the underground orchid is an exciting new addition," Mr Signor said.

"If this discovery is the Eastern Australian Underground Orchid, this will be the first time in more than a decade that a new population of this species has been found in NSW.

"A single flower head was discovered recently in Barrington Tops by local fungi enthusiast Maree Elliott, who quickly realised she had stumbled on something extraordinary.

"This year, we were delighted to find not one but two flower heads at the same location," said Mr Signor.

Dr Mark Clements, an orchid specialist from the Centre of Australian National Biodiversity Research is carrying out DNA testing to determine if the flower heads are the Eastern Underground Orchid species.

Very little is known about underground orchids and their preferred habitats. The Eastern Underground Orchid has only previously been found at a handful of sites in eastern NSW including Bulahdelah, the Blue Mountains and Nowra.

They produce a flower spike that just penetrates the soil surface for a few weeks each year, possibly to attract small flies searching for fungal fruiting bodies in which to lay eggs.

The orchid is known to 'move' slowly across the forest floor, since it grows at one end and dies off at the other.

The NSW Government's Saving Our Species (SoS) program is funding further survey work to inform the management and protection of this extraordinary threatened plant.

"If you think you have spotted an underground orchid flower head while enjoying our beautiful national parks, please contact the NPWS Barrington Tops Area office at Gloucester on 02 6538 5300."