Ten critically endangered Bellinger River Snapping Turtles have been returned to their natural habitat on the NSW Mid North Coast to help secure the species' future in the wild. 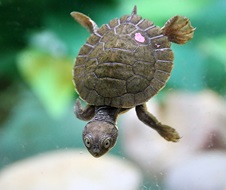 The program to help the Bellinger River Snapping Turtle is part of the NSW Government's $100 million Saving our Species fund.

Environment Minister Matt Kean said it's providing a lifeline for one of the world's rarest turtle species, after a freak virus wiped out about 90% of the population within three months.

"Before the disease outbreak, we estimate there were up to 4500 of these freshwater turtles living in the Bellinger Catchment – the only place they're found on earth," Mr Kean said.

"About 20 virus-free turtles were able to be collected from the river for a captive breeding program at Taronga Zoo in an effort to try to secure a future for this species and improve the environment for our future generations.

"Now, on World Turtle Day, it's fantastic that we're able to announce the breeding program is proving a success, and we've released 10 juvenile turtles back into their natural habitat."

Member for Oxley Melinda Pavey said the local community has been helping with a citizen science project at the river.

"The people living along this river are passionate about protecting the flora and fauna that rely on it. The Bellingen Riverwatch volunteers have been regularly monitoring water quality to help the NSW Government with its work," Ms Pavey said.

"The number one goal of Saving our Species is to secure the future of threatened plants and animals in New South Wales so they can live safely in their natural habitat," Mr Kean said.

"This project in the Bellinger River shows that, with strong community support and partnerships, we can make real positive change to our threatened species.

"The team will be closely monitoring the 10 turtles we've released back into the Bellinger River, with the hope of releasing many more in the future."

The project is also supported by Symbio Wildlife Park, which manages a second, captive population. For more information on Saving our Species, visit Threatened species – NSW Environment and Heritage

Rare mother and calf captured on camera for conservation