With the annual Spotted-tailed Quoll survey wrapping up this month, the NSW Government's Saving our Species program has identified 52 individual quolls in Barren Grounds Nature Reserve, the highest number since monitoring began 5 years ago. 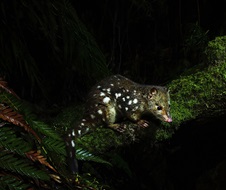 Saving our Species quoll expert James Dawson said this survey and photo monitoring results indicate that this quoll population, one of four monitored across New South Wales, is stable and possibly even increasing.

"Every June the team undertake a 2-week trapping survey where we catch quolls, weigh them, give them a quick health check, a microchip and photograph their unique spot patterns," said Mr Dawson.

"Each quoll is born with its own distinct spot pattern and like fingerprints they are the best way we can tell each individual animal apart.

"In the most recent survey young and old males and females were caught, showing that the population is a robust resident breeding population.

"It's particularly encouraging to see young females that are the nucleus of the future population.

"Nearly 30 motion sensor cameras have been in place at different sites around Barren Grounds Nature Reserve and adjacent Budderroo National Park and confirm a large and stable population of spotted-tailed quolls.

"Some of the photos we got this year are quite extraordinary, not only because they tell us where and how active these animals are but also because we saw many individuals on multiple cameras.

"This is very encouraging as it demonstrates that this area between the Illawarra and Southern Highlands has a spreading breeding population that is possibly increasing in their geographical range.

"Quolls are very elusive and solitary animals that are largely 'hidden in plain sight'.

"Rarely do we see a quoll outside of the survey so to have built up a 'library' of these photos is invaluable data for the conservation of this local population," said Mr Dawson.

The Saving our Species program is the NSW Government's commitment to ensuring a future for the state's threatened plants and animals. A further $75 million over the next 5 years has recently been committed to continue the work to save threatened species. This latest funding brings the total NSW Government investment in Saving our Species to $175 million over 10 years, making it one of the largest conservation programs of its kind in Australia.