A team of dedicated bush regenerators has recently been working in the Terrania Creek Valley, Nightcap National Park, as part of the Saving our Species (SoS) program. While removing weeds threatening the habitat of the Fleay's barred frog, they made an unexpected discovery. 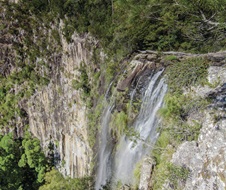 One cool morning in May, team leader Darren Bailey noticed a seedling that looked a little different.

With many years working in the local area and many days at the Fleay’s barred frog (Mixophyes fleayi) management site, Darren knew this little tree was something out of the ordinary.

He decided to snap a few photos and take a waypoint on his GPS before continuing his weed work. After a long day in the field he consulted some reference books and confirmed his suspicions that he had discovered a new population of the vary rare Minyon quandong (Elaeocarpus sedentarius). 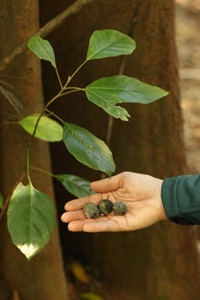 The first collection of this species was made in 1936 north of Minyon Falls in north-eastern NSW. This lonely sample sat at the herbarium for over 50 years until the species was rediscovered in 1992. Following this rediscovery, a flurry of survey activity pursued with botanists roaming here and there, checking leaves, barks and fruits in likely locations throughout the north east. After extensive searches during the mid-1990s a total of 700 individuals were found.

Some 20 years later, those same botanists (Nan Nicholson, Rob Kooyman, Barbara Stewart, Annette McKinley and Hugh Nicholson), bush regenerators Darren Bailey and Alex Stephens, and the NPWS North Coast Branch SoS team had been marshalled by SoS Project Officer Justin Mallee, and were gathered around a picnic table to share a cup of tea, disinfect their boots and plan the day ahead.

The mission: to survey the area surrounding the seedling discovery and find more individuals of the rare and illusive Minyon Quandong. While cups of tea and planning have not changed much in the 20 years since the initial field work, hygiene has become very important, especially since the rapid decline in mature individuals at other sites is thought to be related to a fungal pathogen.

As the team descended on the discovery site there were cameras flashing, GPSs beeping and hand lenses being wielded with expert precision. Over the following hours many an, "Oooo!", "Wow!" and, "I've found one" could be heard throughout the valley.

The results: 11 trees were located at the new site - one for each member of the field team! These were comprised of 8 mature trees, 2 seedlings and 1 tree reshooting from coppice shoots. It was a very productive day and a great result for the SoS program. Thanks to all who attended for volunteering their time and contributing to the conservation of one of the natural wonders of the Gondwanan Rainforests of Australia World Heritage Area.