Critically endangered smoky mice have been released back into the wild in South East Forest National Park, in a world first for the species. 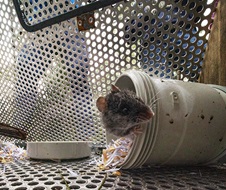 Minister for Environment James Griffin said the release marks a significant milestone in the recovery of this species from the brink of extinction.

"To the untrained eye, these tiny mice might look quite common, but there are fewer than 100 smoky mice left in the South East Forest, which is one of only 2 known populations in New South Wales," Mr Griffin said.

"For the first time ever, we have reintroduced 13 of these rare mice back into the NSW wild where they one thrived.

"This is the culmination of years of painstaking conservation work, which is helping turn back the tide on extinctions and secure this species' survival into the future."

The conservation of the smoky mouse is led by the NSW Government's Saving our Species program, which is backed by a $175 million commitment over 10 years.

The smoky mouse is one of many species earmarked for the rewilding of the State's newest of seven feral free areas, Nungatta, in South East Forest National Park.

Once all seven rewilding sites are complete, 65,000 hectares of national parks will be feral free and provide a significant conservation benefit for more than 50 species.

The reintroduced smoky mice were bred for conservation by Priam Australia's National Threatened Species Institute near Canberra, in a specialised facility that replicates their preferred habitat in the South East Forest National Park.

"With such low population numbers in the wild, our long-term goal when setting up the breeding facility was to eventually return this species to its wild, natural habitat," Dr Broome said.

"Now we have reached this milestone, so we are hopeful that the smoky mouse continues to survive in the wild and possibly even increase their population numbers in their coastal forest habitats."

Remote cameras and micro-chip readers have been set up in and around the initial release pens within the national park and will provide data on how the released mice are faring.

In addition to NSW Government funding through the Saving our Species program, the smoky mouse release was supported by $210,000 from the Australian Government's Bushfire Recovery for Wildlife and their Habitats program.

For more information on the smoky mouse and the Saving our Species initiatives to ensure their survival, visit Smoky Mouse