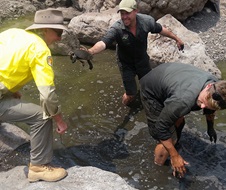 Department of Planning, Industry and Environment (DPIE) spokesperson, Kylie Yeend, said she was pleased expert teams have begun moving these precious animals to larger waterholes to help them get through the drought.

"The Barnard River is one of the waterways in the Manning River Valley which is home to these rare turtles that have been around for 50 million years," Ms Yeend said.

"The Barnard River is now largely dried up with only a series of small, shrinking waterholes left for the Manning River turtles and other aquatic wildlife.

"Our experts are taking urgent action, working with Aussie Ark to monitor and relocate turtles from small waterholes into larger ones until rainfall replenishes the waterways."

Director of Aussie Ark Tim Faulkner said they have established a world-first 'insurance population' for the Manning River turtle, where three turtles rescued from the waterholes have been taken into care for conservation and breeding.

Ms Yeend said we are now in a position to intervene and protect Manning River turtles from extinction.

"We can all do our bit in these unprecedented situations by going down to rivers and waterholes affected by drought to check for sick or dying turtles," Ms Yeend said.

The public should not take animals out of the environment but report anything significant to the Enviroline on 131 555.

A summer of Discovery