A new population of the critically endangered Pot-bellied greenhood orchid (Pterostylis ventricosa) has been discovered in the Southern Highlands of New South Wales. 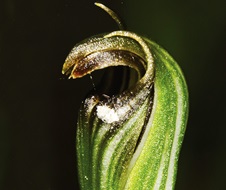 Threatened Species Officer Dr David Bain said the surprise discovery of 170 of these extremely rare orchids is an example of the positive impact the NSW Government's Saving our Species (SoS) program is having on the state's map of biodiversity.

"Quite simply finding more sites gives us more opportunities to secure the survival of these plants into the future," Dr Bain said.

"These are small orchids that are challenging to identify, although have obviously been named for their resemblance to having a round pot belly.

"To date these flowers have only ever been found in the Shoalhaven and Southern Highlands area, typically in low numbers so this recent discovery of nearly 200 mature individuals is a huge boost for this species".

"Once a new population of a rare species is located, we work in partnership with the landowners to try to make sure they stay safe.

"We can't protect populations we don't know about, and over the last five years, threatened species experts have found 46 new populations of 23 different threatened plant and animal species just in southern NSW alone.

"Programs like SoS put more experts in the field for on-ground monitoring. Without this initial mapping and fieldwork these orchid populations might have been lost to the world before they were even known," said Dr Bain.

Over $4 million for NSW coastal communities