A satellite tracking project involving 20 koalas is shedding light on this free-ranging population and its habitat. 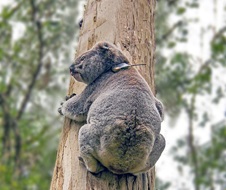 Even the word ‘koala’ comes from the Highlands with the Gundungurra calling them Colo or Cola, from which the hamlet of Colo Vale gets its name.

Now, an innovative project is reacquainting the human residents of the Highlands with its most loved furry, tree-dwelling residents.

Twenty koalas have been fitted with satellite tracking tags and set free to provide information on where koalas live, what they eat and how they move about. Hundreds of spotlighting sites have been created to help build maps of habitat and corridors for use in conservation and development planning – to ensure that the Highlands koalas never again suffer a population crash and that they can continue to live, breed and move about as they have done for millennia.

Securing the koala in the wild in NSW for 100 years

The Saving our Species Iconic Koala Project aims to secure the koala in the wild in NSW for 100 years by reducing critical threats to the species; ensuring adequate protection, management and restoration of koala habitat; and maintaining healthy breeding populations of koalas throughout their current range.