In another win for conservation, 3 mammal species once locally extinct, are booming since their reintroduction to Sturt National Park. 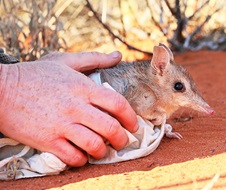 Environment Minister James Griffin said recent surveys have shown bilbies, crest-tailed mulgaras and Shark Bay bandicoots, were busy breeding and in good numbers, reflecting the conditions in the far-west of New South Wales at the moment.

"There is a baby boom underway in far-west NSW and I'm thrilled to see this important rewilding program going from strength to strength," Mr Griffin said.

"I want people from right across New South Wales to be able to see the conservation efforts in the bush at their best and this program is one of seven programs just like it working towards that goal.

"Nineteen crest-tailed mulgaras were originally translocated from wild populations in South Australia in August 2020 and from recent surveys, the numbers have rocketed up to be between 160 and 240 individuals, eventually we are hopeful they will number around 480.

"In September 2020 10 greater bilbies were reintroduced from Taronga Western Plains Zoo and were supplemented by another 30 bilbies in May 2021.

"The bilby population is now also booming and is estimated to number up to 60, including female bilbies, who are now having pouch young of their own.

"Sturt National Park has been an ideal location with incredible rainfall over the past year and it is heartening to see locally extinct species thriving in their natural habitat."

Sturt National Park site is one of 3 feral-predator free areas already operational funded by the NSW Government and managed in partnership by the National Parks and Wildlife Service (NPWS), Wild Deserts led by UNSW and the Australian Wildlife Conservancy.

The NPWS is currently establishing a further 4 sites which will expand the fenced feral-free area in our national parks to more than 65,000 hectares and provide a conservation benefit to more than 50 threatened species.

"It's a ground-breaking program to counter damage done to wildlife by feral animals including feral cats which kill 1.5 billion native animals every year in Australia," Mr Griffin said.

"It's wonderful to see these animals back in their original home, prospering, and restoring this desert ecosystem to some of its past magnificence," Prof Kingsford said.

"As well as mulgara and bilbies, 13 Shark Bay bandicoots translocated in May last year have not wasted time either.

"The population is estimated to have doubled, only 6 months after they were released. Each female bandicoot can have 2 young and the 6 females translocated have already had 2 litters each since arriving at Sturt National Park."

Based on the success of these 3 species, there are plans to translocate a fourth species to the national park, the golden bandicoot, in 2022.