A minutes silence was held yesterday on the cliffs above Dunbar Head to commemorate the greatest peacetime shipwreck disaster in the state’s history. 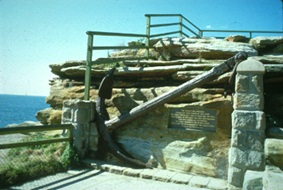 “There was one survivor of the 122 people on board when the Dunbar ran aground at the foot of the sea cliffs above Watson’s Bay on this day in 1857,” Heritage Minister Gabrielle Upton said.

“The story of the sinking of the Dunbar, packed with immigrants perhaps coming to seek their fortunes in the gold rush so close to their destination is one of the saddest for its sheer scale.

“Instead of welcoming their loved ones in Sydney Cove, Sydney siders watched from the cliffs in horror as bodies were pounded on the rocks below.

“Miraculously one lone survivor was tossed onto a rock shelf at the base of the cliffs at Gap Bluff and clung there for two days until rescuers were able to reach him,” Minister Upton said.

“Today we have only a few reminders of the tragedy, including the wreck itself, an anchor memorial, historic rock engravings on the cliffs above the wreck site and victims’ burial plot at St Stephens Church and Cemetery Newtown, all of which are protected by listing on the State Heritage Register.

“Preserving, commemorating and researching historic events like this reminds us of our past and shapes our understanding of our heritage.

“That’s why the Office of Environment and Heritage is undertaking more research on the wreck site, with the assistance of not-for-profit group Silentworld Foundation.

“We will be undertaking the first side-scan sonar survey of the wreck, which lies some 11 metres underwater, to map the site and this will add to our understanding of its archaeological extent.

“Further works at the site will see recording undertaken of etchings left on the sandstone rocks above the wreck by the rescuers in 1857.

“These etchings act as an historic graffiti memorial and recording them will assist in ongoing management,” Minister Upton said.