Fines apply for removing firewood from national parks, and the National Parks and Wildlife Service (NPWS) will be enforcing our firewood policy over winter. 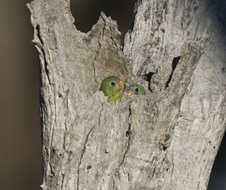 Collecting firewood, including fallen trees and dead wood, for use outside of a park boundary is prohibited. Most parks also prohibit the collection of firewood for use within parks.

The removal of dead wood and dead trees, including hollow-bearing trees, contributes to the decline of our native forests and loss of habitat for many native animals.

Habitat loss is a major threat to biodiversity and threatened species. Hollow-bearing trees provide homes for a range of threatened species including turquoise parrots, masked owls, skinks, antechinus and spotted-tail quolls. That’s why collecting firewood from national parks is usually not allowed. There are some exceptions to this rule:

Contact the nearest NPWS office to find out what rules apply for collecting firewood in national parks and reserves.