Renewable Energy Sector Board to boost local manufacturing and jobs

Local jobs and manufacturing opportunities in the renewable energy industry are set to boom following the launch of the State’s first Renewable Energy Sector Board , unveiled by the NSW Government today. 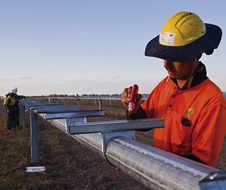 Energy Minister Matt Kean said the Renewable Energy Sector Board will play a key role in delivering on the NSW Government’s commitment to boost opportunities for local jobs and industry – particularly in the regions.

“We have brought all the key players to the table to make sure we don’t miss any opportunities to support local jobs and industry as we modernise the State’s energy infrastructure over the coming decades,” Mr Kean said.

“My brief to the Board is do not leave any stone unturned. This is a once in a generation opportunity to secure the economic and employment benefits under our Electricity Infrastructure Roadmap for our local industries, workers and consumers.”

The Board will look at everything from material sourcing and supply to contracting arrangements, and explore ways to give NSW manufacturers a competitive advantage in emerging ‘green’ supply industries. It will be joint chaired by Daniel Walton from the Australian Workers’ Union and Craig Memery from the Public Interest Advocacy Centre, and brings together 12 representatives from across the sector.

“These new policies should drive genuine accountability and replace the ‘tick and flick’ culture of procurement which has favoured overseas suppliers in recent decades,” Mr Walton said.

“This Board will play a critical role in maximising the use of locally produced and supplied goods. This will both sustain and boost jobs for local workers and foster opportunities for apprentices and trainees in the renewable energy industry.”

Joint Chairperson Craig Memery, from the Public Interest Advocacy Centre, said we need to make sure the sector is competitive to deliver choice for consumers and drive down electricity prices.

“We want to make sure our local workers and industries reap the economic benefits of the transition to cheap, reliable and renewable electricity, and we’ll be looking at ways to do this in the best interests of NSW electricity customers,” Mr Memery said.

The Board, which will provide its first report to the Minister by the end of March 2021 and will meet at least once every six months, was a key component of the NSW Government’s landmark energy legislation that passed through the NSW Parliament in November 2020.