Hundreds of native turtles have been rescued from a drying lake in the Murrumbidgee catchment and released into the river, near Balranald. 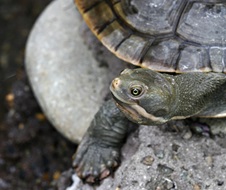 The turtles faced a 7 kilometre overland trek from the drying bed of Yanga Lake to the nearest suitable habitat. But it wasn't just distance standing between the turtles and their new home. A major highway and hungry predators posed a significant threat to their survival.

With the help of staff from the National Parks and Wildlife Service and Department of Planning Industry and Environment, more than 600 turtles were relocated from the lake to the river last week.

Senior Environmental Water Manager James Maguire said the short-necked Murray River turtles (Emydura macquarii) ranged in size from 20 centimetres to 40 centimetres, with some individuals likely to be more than 20 years of age.

'We knew there was a healthy population of turtles living in Yanga Lake,' Mr Maguire said.

'During the Millennium Drought we faced a similar challenge when the lake dried out, leaving the turtles at risk of predation and starvation.

'Over the last decade, we have provided numerous environmental flows into the lake to support the native plants, fish, birds and other animals living in and around the site.

'However, with the lake drying down once more, we decided to intervene and relocate the turtles within Yanga National Park to the safety of the river.

'Working with a commercial fisherman, the team carefully captured and transported the turtles to a release point on the Murrumbidgee River.

'The current density of turtles within the river is well below historical averages so these individuals will have a fighting chance of surviving and thriving in the river channel.

'Once in the river, turtles are very mobile and can move up to 50km from their release point. We hope to see some of them return to the lake when the drought breaks,' he said.

The ongoing drought means there is insufficient water for the environment available to refill the 1500 hectare lake.

In response, the Department's Water for the Environment team has implemented plans to provide water for drought refuge in nearby Tala, Talpee and Monkem creeks along with Tala Lake.

The turtle relocation also provided an opportunity to remove 12 tonnes of carp from the lake which will now be made into garden fertiliser.