Research underway at the Lake Cargelligo fish and bird nursery

Recent surveys of both fish and birds in and around Lake Cargelligo by the Office of Environment and Heritage (OEH) and a local ecologist are helping to develop a more complete picture about how the lake contributes to the ecological health of the whole Lachlan valley. 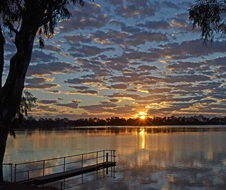 OEH ecologist Dr Jo Lenehan says the research is helping to understand the role the waterway plays as a breeding area for a range of native species.

“Our research has involved taking fish samples during all three of the most recent inflows to Lake Cargelligo, and we’ve found strong numbers of juveniles from a surprising array of species,” says Dr Lenehan.

Dr Lenehan works closely with local ecologist Adam Kerezsy, whose local insights are then made available to the Lachlan Environmental Water Advisory Group and considered in environmental water plans for the Lachlan valley.

“It’s been fantastic to see plenty of baby bony bream and other small species like gudgeons, Australian smelt and hardyhead as part of this research, because even though people don’t usually see them these are the species that underpin our ecosystem. Without small fish, we’re unlikely to have big fish like cod and Golden perch,” said Mr Kerezsy.

“Bony bream school and are a main food source for the larger fish-eating birds like pelicans and cormorants, and we’ve also seen large numbers of pelicans feeding on Lake Cargelligo, especially as Lake Brewster draws down after the end of the irrigation season and food supplies within Brewster become limited. Lake Cargelligo is now providing a productive and important foraging ground for both adults and juvenile pelicans dispersing from their breeding site at Lake Brewster,” he said.

Australian smelt, hardyhead and gudgeons are smaller fish, rarely reaching seven or eight centimetres, but they are still a vital food source, not only for birds like terns and pelicans, but also for larger fish. The research has also shown good numbers of juvenile Golden perch down to 30mm in length, indicating a successful result of local breeding events.

“This big, shallow lake, complete with a lot of different habitats, such as creeks, canals, backwaters and plenty of cover provides an ideal breeding environment for fish because there’s plenty of food and plenty of places to hide. Further work is needed to confirm the extent to which fish species use the lake for breeding before moving back into the river,” said Mr Kerezsy.

Dr Lenehan says that the diversity of waterbirds is also a positive sign, with Lake Cargelligo the only location in the mid-Lachlan where both the sharp-tailed sandpiper and marsh sandpiper were recorded last season.

Read more about the Lachlan valley