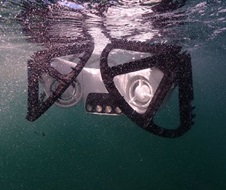 A $10,000 cash first prize was awarded by NSW Environment Minister James Griffin, with Hullbot addressing one of the Marine Estate Management Strategy’s (MEMS) key threats to the NSW marine environment.

'Hullbot invented a robot to clean marine growth off boat hulls, reducing the need to use harmful antifouling paints that pollute seawater with toxins and micro-plastics.

'It’s an exciting invention as it prevents marine growth on boats without using harmful antifouling paint and has already cleaned hundreds of hulls in Sydney Harbour.

'Well done to this ocean-loving team of environmentalists, engineers, roboticists and creatives who are passionate about solving the oceans’ problems,' she said.

All six finalists for the new department-sponsored award had developed transformative technologies and solutions addressing priority threats to the NSW marine environment.

'Congratulations to all of the finalists, whose innovations could significantly reduce threats to our ocean’s health, and well done to the first runner-up SLURRYTUB and second runner-up Carapac.'

SLURRYTUB was developed by a Sydney builder to stop heavy metals and solids from construction sites being washed down stormwater drains and into the sea or harbour. It works overnight, draining cement slurry through a tub fitted with a filter.

Carapac’s mission is to change the world of packaging with a sustainable and compostable plastic-alternative ‘film wrap’ made from crustacean shell waste – such as prawn shells. Shell waste is processed into a range of packaging films, which can extend fresh food shelf-life by up to two weeks.

Learn more about the NSW Marine Estate Management Strategy, and find out more about the six finalists in the NSW Ocean Innovation Award 2022 – Finalists video.