Rocky Knob, near Newcastle, recognised for its cultural and spiritual significance to Aboriginal people by NSW Government

Part of Hexham Swamp near Fletcher, Rocky Knob has been declared as an Aboriginal Place in recognition of its importance to the Pambalong Clan of the Awabakal nation. 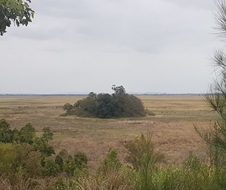 'Rocky Knob is known to the local Aboriginal people as a place for burial ceremonies and to pay respect to those who passed into the next life. It also represents the adaptability and resilience of the Aboriginal people of the Hunter region,' said Mr Kidman.

Rocky Knob is an elevated site of about 360 metres square sitting above the Hexham Swamp. The elevated position of the site provides views to all directions including to the Watagan Ranges.

Rocky Knob is connected through songlines to other cultural sites in the area, including Mount Sugarloaf, Black Hill Ridge and the Doghole Cultural Site in Stockrington.

'The continual protection of Rocky Knob is so vitally important to our People, and the Aboriginal objects collected within close proximity are physical reminders left by our Ancestors which provide us, as Descendants of the Awabakal People, an opportunity to make a physical connection through time with our Ancestors,’ said Ms Brauer.

Artefacts and burials found on and around Rocky Knob have the potential to contribute to our understanding of Aboriginal cultural practices in the Hunter Region and to NSW Aboriginal culture and history.

Further information can be found on the Heritage NSW website.

Patrols stepped up due to illegal beach parties