Lord Howe Island’s natural environment is booming following the successful completion of one of the world’s largest rodent eradication programs. 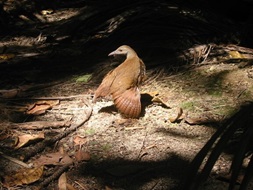 In just over eighteen months the $15.5 million program has all but wiped out an estimated 300,000 plus rodents and other feral pests giving the island’s native plants and animals a fighting chance at revival.

Visiting the island last week, Environment Minister Matt Kean said he was delighted with the success of the program highlighting what can be achieved when goverments work hand-in-hand with local communities and act on the best scientific advice.

“This is an extraordinary example of a community conservation effort backed by world leading science,” Mr Kean said.

“Feral pests and weeds have wreaked havoc here in the past. This program is reversing that and changing the destiny of the plants and animals that call this precious and unique part of Australia home.”

One of the outstanding examples of the program’s success is the doubling in population of the island’s iconic flightless Lord Howe woodhen, with a recent survey recording over 440 birds, twice the number recorded from just 12 months prior.

This is a record-breaking result with our scientists saying it’s the highest number of woodhens ever recorded since the island’s annual surveys began. The previous record was just 250 birds.

“This is such a unique, precious and rare environment, there are flora and fauna here that are found nowhere else on earth, it is vitally important we protect it or risk losing it forever,” Mr Kean said.

While the island will not be officially declared rodent free until two years after the baiting, (expected in the second half of this year), there have been no confirmed sightings of rodents since the baiting was completed in November 2019.