Frogs are making the most of limited wetland habitat in the state’s north as the drought continues. 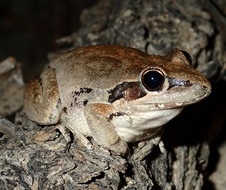 Surveys by the Department of Planning Industry and Environment have revealed a diverse mix of frog species, but low numbers in wetlands across the Gwydir wetland system.

Environmental scientist Dr Amelia Walcott said the most recent round of surveys had detected a total of eight frog species.

‘Of all the sites surveyed, only one had received environmental flows within the past 9 months and it was this site that yielded the greatest diversity and highest total number of frogs.

‘Water had arrived in Whittaker’s Lagoon only a few days before we conducted our survey and supported 7 species.

‘While we record all frogs present at monitoring sites, and incidental observations, it is the flow-responsive frogs we are particularly interested in. These frogs rely on flows to wetlands to breed.

‘Flow-responsive frogs were heard calling at four of the 12 sites we surveyed but young frogs (metamorphs) were seen at only one site to indicate successful breeding.

‘Our observations, combined with data gathered over several years, demonstrate the importance of water for the environment in providing opportunities for these frogs to breed.

‘Environmental water provides the trigger that flow-responsive frogs need to breed and grow. These frogs need water to persist in their environment for at least 2 to 3 months to complete the aquatic phase of their life cycle.

‘Successful breeding is important for maintaining frog populations over time.

‘Water for the environment has an important role to play in maintaining the resilience of frog populations through these tough, dry times,’ she said.