What do the last Tasmania Tiger and a plant living only in Wellington and Bathurst have in common? Both get some time in the spotlight on Threatened Species Day 7 September. 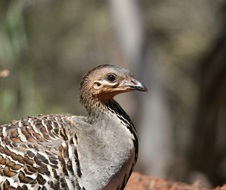 Office of Environment and Heritage North West Acting Team Leader Ecosystems and Threatened Species David Coote said there were more than 200 threatened animals and plants in Dubbo and the central west.

"Threatened Species Day is celebrated on 7 September every year, the day the last known Tasmanian Tiger died in captivity.

"It's a day to highlight all the work that is being done across the state on saving threatened plants and animals.

"In the Dubbo area for example did you know we have a plant called zieria obcordata, that grows only in Wellington and Bathurst?

"It's a flowering shrub with delicate white flowers and exists on private property where the owners work with OEH in efforts to bolster numbers of the endangered plant.

"The Dubbo OEH threatened species team also work with many other threatened plants and animals in western NSW, including the malleefowl and glossy black-cockatoo.

"Glossy black-cockatoos are distinctive large birds with vivid red panels on their tails, listed as vulnerable in NSW.

"They call the Goonoo State Conservation Area home and OEH works with the Dubbo Field Naturalists to monitor this amazing species.

"Travellers through Goonoo may have also noticed the malleefowl crossing signs along the highway.

"Malleefowl are an endangered NSW bird and a target species of the NSW Government's $100 Million Saving our Species program that aims to maximise the number of threatened species that can be secured in the wild in NSW for 100 years.

"Malleefowl benefit from a landscape-wide community fox baiting program which has been ongoing in Goonoo for many years.

"Motion sensor cameras have also been set up at known malleefowl sites to assist in monitoring and pest control," Mr Coote said.

Activities for Threatened Species Day in the local area include library displays in Dubbo and Wellington and a badge giveaway in local businesses.

"We were also involved in the Dubbo Sustainability Expo on the weekend, and were amazed at the level of interest in threatened species" Mr Coote said. "Many people are surprised to find that threatened species occur right here in our backyard".

Video of remote mallefowl camera: The malleefowl and the fox