It’s World Frog Day on March 20. We reached out to Supervisor of the Herpetofauna division for Taronga Zoo Sydney, Michael McFadden, to shed some light on the vital role our frog friends play in our ecosystems and how Taronga Zoo is helping to ensure they have a bright and hoppy future. 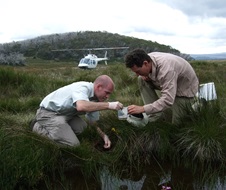 Who’s who in Taronga Zoo

You might have had the pleasure of seeing some wild and wacky animals at Taronga Zoo in Sydney, but you might not know that through research, action and advocacy, Taronga is also leading vital work that supports wildlife, habitats, and communities globally. Through world class work in conservation science, Taronga aims to increase our understanding of the natural environment and enhance efforts to protect it.

Advances in amphibian assisted-reproductive technologies are revolutionising conservation outcomes from breed-for-release programs, primarily by ensuring populations remain genetically diverse and adaptive to the suite of environmental stressors that continue to drive declines.

One person helping to spearhead this critical work is Michael, who oversees the Zoo's collection of reptiles and amphibians, including the management of conservation programs.

Fantastic frogs and where to find them

Michael's and his team’s work focus is mostly on reintroduction biology and developing techniques to improve captive breeding and rearing success in threatened Australian frogs. This includes the Frog Conservation Biobanking program, that targets the highly endangered booroolong frog, southern and northern corroboree frogs, spotted tree frog and the yellow-spotted bell frog. The frogs involved in this breeding program are hard to find in the wild as they have declining population trajectories, with declines exacerbated by recent drought and bushfire events. Through sperm biobanking from live males, the main outcome will be to permanently preserve existing genetic variations.

Michael said, “Frogs play an enormous role within an ecosystem and are critical to most food webs. The biomass of amphibians in many ecosystems throughout Australia constitute a huge component of the country’s overall biomass. Not only do they play a critical role in controlling invertebrates within those ecosystems, they have a very important role in feeding the predators too”.

The southern and northern corroboree frogs and yellow-spotted bell frog, in particular, have declined to the brink of extinction – primarily due to the ‘chytrid fungus’. This infectious disease has impacted frogs across the world. The yellow-spotted bell frog was even thought to be extinct in the wild for over 30 years, until a small population was rediscovered in late 2009. Fortunately, an insurance population was established at Taronga Zoo and successful breeding in recent years has permitted an experimental reintroduction program to re-establish the species.

Michael said, “Without the ex-situ programs, more frogs are at risk of being lost forever. These programs are excellent examples of successful collaboration between Taronga, the Saving our Species program, and various other partners.

As far back as he can remember, Michael has always been passionate about the conservation of native species and ecosystems.

“Seeing the number of threatened species in Australia requiring attention, and knowing that we can make a significant difference, has inspired me to devote my working life to conservation”. And it is this passion and drive that leads to real, tangible results.

These results are even greater when we work together. “Partnerships are absolutely critical”, Michael said. “The partnership between the zoos, the Saving our Species program, our university partners and others are the key to successful conservation outcomes. It is absolutely necessary for in-situ and ex-situ components of the program to be woven together to prevent the extinction of these highly threatened species”.

Michael explains that everyday people can help by doing what they can do minimise our impacts on climate change and to protect our vital local waterways from threats to our fabulous frogs, such as pollution and weeds.

Learn more about Taronga’s frog conservation project and how you can get involved.